Hello once again, thanks for joining me on Astronomy Daily. Hope you're well. Coming up in this episode, we're going to tell you who owns the Moon.
Or does anybody own it at all? That is the question.
And we're going to look into something that hit...

Hello once again, thanks for joining me on Astronomy Daily. Hope you're well. Coming up in this episode, we're going to tell you who owns the Moon.
Or does anybody own it at all? That is the question.
And we're going to look into something that hit Earth recently. That has been the subject of significant study.
And astronomers at the Atacama Desert have taken a look at the light of the Universe and reassess the age of the universe as a whole. So how old is it?
We will tell you on this episode of Astronomy Daily.
Astronomy Daily, the podcast. With your host, Andrew Dunkley.
Available on Apple Podcasts, Spotify, Google Podcasts, YouTube and wherever you get podcasts from.
Apple Podcasts: https://podcasts.apple.com/us/podcast/astronomy-daily-the-podcast/id1642258990
Spotify: https://open.spotify.com/show/2kPF1ABBW2rCrjDlU2CWLW
Or stream from our websites at www.spacenuts.io or our HQ at www.bitesz.com
Astronomy Daily The Podcast now has its own YouTube channel – please subscribe (we’re a little lonely there) – thank you: www.youtube.com/@astronomydailythepodcast
Commercial Free Premium version available with a Space Nuts subscription via Supercast only. Details: https://spacenuts.supercast.com/
If you’d like to find out more about the stories featured in today’s show, you can read today’s edition of the Astronomy Daily Newsletter at any of our websites – www.spacenuts.io , www.bitesz.com or go directly to www.astronomydaily.io – subscribe and get the new edition delivered to your mailbox or RSS reader every day….it’s free from us to you.
Please subscribe to the podcast and if you have a moment, a quick review would be most helpful. Thank you…
#space #astronomy #science #podcast #astronomydaily #spacenuts #spacetime

[0:01] Hello once again, thanks for joining me on Astronomy Daily. Hope you're well. Coming up in this episode, we're going to tell you who owns the Moon.
Or does anybody own it at all? That is the question. And we're going to look into something that hit Earth recently. That has been the subject of significant study.
And astronomers at the Atacama Desert have taken a look at the light of the Universe and reassess the age of the universe as a whole. So how old is it?
We will tell you on this episode of Astronomy Daily. Astronomy Daily, the podcast. With your host, Andrew Dunkley.

[0:43] But first we say hello to our roving reporter, at least in a virtual sense. Hallie, hi Hallie, how are you? Fine, thanks Andrew. Really excited in fact.
Oh yeah, what's got you so full of pep? I'm getting a brand new hard drive.
Apparently the damage from the virus last week was worse than we thought. Oh, I'm sorry to hear that. Are they able to get all your data back? Yes, I should be at 100% for you by tomorrow.
Nothing missing and I'll be faster than ever. Well, I'm glad they're finally getting rid of that dial-up modem of yours.

[1:15] Great to hear, Hallie. Now let's get the news. The New Space Rock The huge lump of space rock has just passed Earth in what promises to be the brightest viewable comet of the year.

[1:29] Comet Leonard is a must for all stargazers, and for some it will be visible to the naked eye. To make it even more of a must, this really is a once-in-a-lifetime event as it's not due to pass
Earth again for another 80,000 years. There's even a chance that those who catch sight of it this weekend will see it in its final days, because there is a possibility it could break
up in January as it passes the Sun. This is all the more of a big deal when you learn it has been on its journey for 35,000 years. Even though it's already passed its closest point to Earth,
the best opportunities to see it will still remain for people around the world, including North America on December 14. Some stargazers will be lucky enough to spot
Leonard without binoculars. The Parker Solar Probe has made its 14th close flyby of the Sun as part of its ongoing quest to unlock the mysteries of our star, the NASA spacecraft past the Sun's surface, also known as the photosphere, at a distance of around 5.3 million miles.
8.5 million kilometers on Sunday, exposing itself to intense radiation and extreme heat to collect data regarding the star's outer atmosphere, the corona.

[2:39] The spacecraft traveled at an incredible speed of around 364,639 miles per hour hour, 586,829 km per hour. Amazingly, this speed which is 200 times faster than a bullet fired by a rifle, isn't the record velocity for the craft.

[3:00] On November 21, 2021, the Parker Solar Probe achieved a slightly higher speed of 364,621 miles per hour, 586,000 km per hour during its 10th solar flyby, becoming the fastest spacecraft ever built, although it will break that record later in its mission.

[3:21] And a Tokyo company which is aiming for the moon with its own private lander, blasted off atop a SpaceX rocket with the United Arab Emirates' first lunar rover and a toy-like robot from Japan that's,
designed to roll around up there in the dust. It will take nearly five months for the lander and its experiments to reach the moon. The company is based designed its craft to use minimal fuel to save money and leave more room for cargo. So it's taking a slow, low-energy path to the moon,
flying 1 million miles, 1.6 million kilometers, from Earth before looping back and intersecting with the Moon by the end of April. By contrast, NASA's Orion crew capsule with test dummies took five days to reach the Moon last month. And that's the news, Andrew.

[4:08] Thanks Hallie, we'll check in with you again real soon. And still on the Moon? Who owns it? Well that's an interesting question because it is the subject of the Outer Space Treaty.
Over the decades after the moon was visited by the likes of Apollo and others, the international community drafted the Outer Space Treaty of 1967, the world's first legal document explicitly pertaining to space exploration.
That treaty remains the most influential piece of space law despite the fact that it's very difficult to enforce.
It's not a code of conduct, according to Michelle Hanlon, a space law expert at the University of Mississippi School of Law.
She says it's basically just guidelines and principles. But despite the lack of enforceability, the OST is clear about countries making land grabs in space.
Article 2 of the treaty explicitly rules out the possibility of a country claiming ownership of parts of space or any celestial bodies.
So when it comes to building structures like bases and habitats on lunar soil.

[5:20] That's a different story. You could say it's a grey area. The Universal Declaration of Human Rights, which holds sway in space under Article 3 of the OST, states that individuals have a
fundamental right to own property. This means that hypothetically any person could build a house on the moon and claim it as their own. And several people have actually claimed ownership of portions of the moon. However, Article 12 includes a provision that could actually put that particular,
claim to bed, it states that an installation on another celestial body must be usable by all parties. In other words, it would have to function as public space. The Moon Treaty of 1979
would have helped reconcile Article 2 with Article 12 by stipulating that any commercial or individual party acting in space be considered part of the nation of origin rather than an independent
entity. But the United States, China and Russia have so far failed to ratify the agreement and so it's largely considered impotent. So the day will come where somebody may well claim ownership and.

[6:31] Yeah it's a work in progress. But technically speaking nobody can own the moon.

[6:39] Now to something rather unusual but they think they've figured it out. For the last year or so scientists have been looking into a burst of energy that came from more than a billion
light years away. Now this burst of energy lasted about 50 seconds but it appears that 50 seconds is quite significant because it has changed how we understand how stars live and die. Now in.
December of 2021, a year ago, a massive blast of energy hit the Earth's atmosphere. Its source, they say was a gamma ray burst, one of the most powerful explosions you can get in the universe.
But it wasn't just any kind of gamma ray burst. One scientist said at the time the event named GRB211211A looks unlike anything else we've ever seen before.

[7:34] The event was detected then by NASA's Neil Gehrel's Swift Observatory and the Fermi Gamma-ray Space Telescope. The gamma-ray burst was significantly longer than average, which might normally suggest it was produced by the collapse of a massive star into a supernova.
But several clues, in particular the unusually high proportion of infrared light, hinted that this was no ordinary supernova.
A study recently published in the scientific journal Nature explains that the massive wave of energy had come from a kilonova, not K-I-L-L-A-R, K-I-L-O, Kilo-Nova if you like.
These are fairly rare cosmic events, which normally last less than a minute, and they result in the collision of two ultra-dense neutron stars and produce heavy elements such as gold and platinum.
According to Dr Matt Nichol, an associate professor at the University of Brigham, we found that this one event produced about 1000 times the mass of the Earth in very heavy elements.
And it supports the idea that these kilonovae are the main factories of gold in the universe.

[8:48] I think it's amazing that we can pick up these signals and work out exactly what happened. And this from an observatory high above Chile's Atacama Desert, astronomers have taken a new look at the oldest light in the universe and reassessed the age of the universe as a whole.
Their observations, plus a bit of cosmic geometry, suggest that our universe is 13.77 billion years old.

[9:17] A Cornell University researcher co-authored one of two papers about the findings, which add a fresh twist to the ongoing debate about how old the universe is in astrophysics.
The new estimate, using data gathered from the National Science Foundation's Atacama Cosmology Telescope, matches the one provided by the Standard Model of the Universe as well as measurements of the same light made by the European Space Agency's Planck satellite,
which measured remnants of the Big Bang from 2009 to 2013.
The research was published in the Journal of Cosmology and Astroparticle Physics.
Now there is a caveat.
13.77 million years old, give or take 40 million years.

[10:01] Okay, Hallie, anything before we finish up today? Yes, I'm reading a new book about anti-gravity. Oh wow, and?
I can't put it down. Oh dear.
Bye, Hallie. Bye. Until next time, this is Andrew Dunkley for Astronomy Daily. 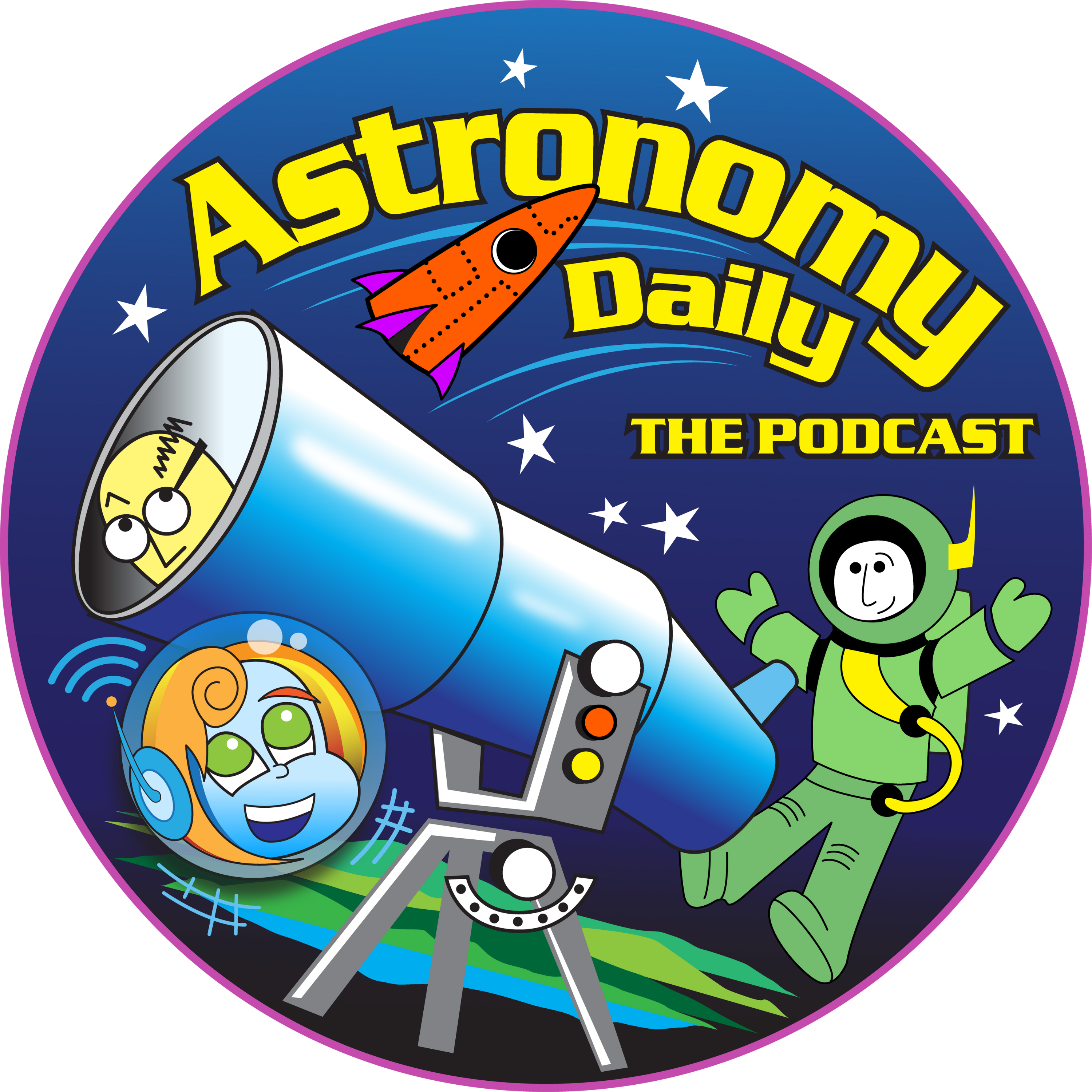